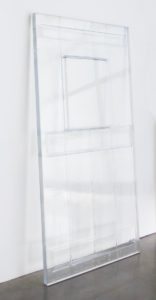 Her reticence sets her apart from other artists of her generation, with their broadcasting careers and lives that face outwards. “Art was never seen as a career when I was studying. Damien [Hirst] had a lot to do with changing the way people thought about it, with his ability to spin anything. People like Grayson Perry, who I shared a studio with back when he was still struggling, great show-offs who want to be in the media all the time… It’s not for me. Damien is a bit quieter now, but you see the residue of him. Tracey [Emin] too, these are people who have done a lot to be out in the world spinning a tale, making art an attractive proposition.”