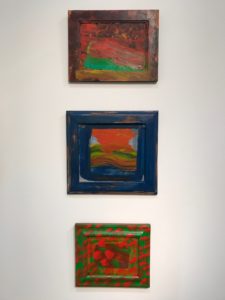 Before his death this month, Howard Hodgkin was preparing the first ever exhibition devoted to his portraits. Paul Levy recalls the man who cared much more about his family and friends than being part of any movement.

Howard Hodgkin: Absent Friends, an exhibition of the painter’s portraits, opens at the National Portrait Gallery on 23 March. There’s a sorrowful irony about the title, as Hodgkin, one of the artistic giants of the late 20th and early 21st centuries, died, aged 84, on 9 March. Probably as erudite as any artist in history, he was a genuine intellectual in the European and American traditions, a connoisseur with an unsurpassed eye, perfect visual recall, and an incessantly obsessed collector. The longing “for acclaim” and “taste for public honours” noted by his friend Bruce Chatwin were merely the measure of his ambition.

Hodgkin never belonged to any movement or school, and his paintings – almost aggressively – defied categorisation. As he wrote: “I am a representational painter, but not a painter of appearances. I paint representational pictures of emotional situations.” Another friend, Susan Sontag, remarked that, as the emotions depicted were “the artist’s … in this sense, all the pictures are autobiographical”. Their “subjects” are friends, husbands and wives, lovers – in their rooms or gardens – as well as places he had visited and, wrote Sontag, “lovemaking and dining and looking at art and shopping and gazing out over water”. As you might expect from this, Hodgkin had a remarkable memory, and also had a gift for love and friendship.