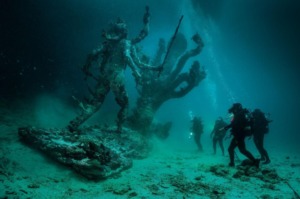 Damien Hirst’s new show in Venice, Treasures from the Wreck of the Unbelievable, is a complicated triumph. The labels for the works on display, dozens of objects, many enormous, depicting mythological beings — monsters, ancient royalty, maiden warriors, three-headed dogs, and suchlike — refer to them in a slightly puzzled or distant way as if only so much can be known. In other words, they’re like the labels in places at the British Museum, and the objects are ‘like’ (if that’s the word) the antiquities you’d expect to find there.