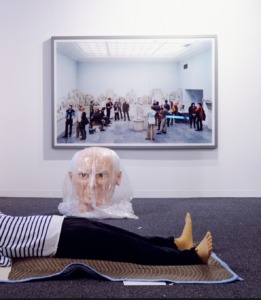 I remember when photographs by Louise Lawler, currently the subject of a retrospective at the Museum of Modern Art, first hurt my feelings, some thirty years ago. They pictured paintings by Miró, Pollock, Johns, and Warhol as they appeared in museums, galleries, auction houses, storage spaces, and collectors’ homes. A Miró co-starred with its own reflection in the glossy surface of a museum bench. The floral pattern on a Limoges soup tureen vied with a Pollock drip painting on a wall above it. Johns’s “White Flag” harmonized with a monogrammed bedspread. An auction label next to a round gold Warhol “Marilyn” estimated the work’s value at between three hundred thousand and four hundred thousand dollars. (That was in 1988. Today, you might not be permitted a bid south of eight figures.)

Art often serves us by exposing conflicts among our values, not to propose solutions but to tap energies of truth, however partial, and beauty, however fugitive; and the service is greatest when our worlds feel most in crisis. Charles Baudelaire, the Moses of modernity, wrote, “I have cultivated my hysteria with terror and delight.” Lawler does that, too, with disciplined wit and hopeless integrity.