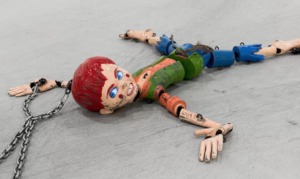 A giant marionette dangles on a chain, rats smoke, a boy dances in urine and the artist beats a man to death … a controversial new show explodes in a frenzy of cartoon sex and violence.

A virtual reality headset over my eyes, headphones over my ears, a gallery assistant helps me grab the metal bar screwed to the plinth. “Hold on tight,” she says. Waiting in line, I watched a woman shudder, nearly overturning the plinth. Another ahead of me shook her head, trying to look somewhere else, but there was nowhere else to look. Someone else tore off the headset and walked away.

Real violence caused a bit of controversy when it opened in March at New York’s Whitney Biennial. People queue to see it, some going especially to watch the animatronic model get whacked.