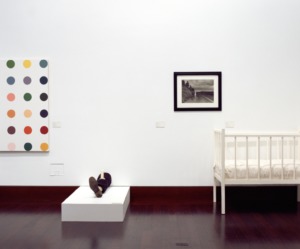 NEW YORK, NY.- With Louise Lawler: WHY PICTURES NOW, The Museum of Modern Art presents the first major survey in New York of Louise Lawler (American, b. 1947), spanning the 40-year creative output of one of the most influential artists working in the fields of image production and institutional critique.

Lawler came of age as part of the Pictures Generation, a loosely knit, highly independent group of artists named for an influential exhibition, Pictures, organized in 1977 by art historian Douglas Crimp at Artists Space in New York. These artists used photography and appropriationdriven strategies to examine the functions and codes of representation. Lawler’s signature style was established in the late 1970s and early 1980s, when she began taking pictures of other artists’ works displayed in collectors’ homes, museums, storage spaces, and auction houses to question the value, meaning, and use of art. Underscoring the collaborative quality of Lawler’s practice, what one sees first in her pictures, both then and now, is works by other artists.