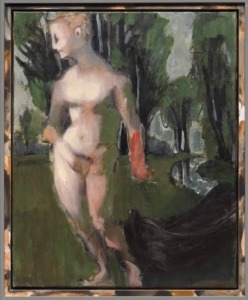 You’re often viewed as controversial—especially in Germany—because of your willingness to address difficult subjects, both in the content of your work and the press. How do you deal with that perception?

I can’t really comment on my reputation because the reputation is in no way justified. I’m a peaceful, happy, cheerful, elderly gentleman, except for the fact that I like to be argumentative.

When I present public artworks there’s always someone who’s against it. I heard that my sculpture was tarred and feathered in Salzburg, for example. What should I say about that? If I was there I’d have punched him in the head, but seeing as I wasn’t, there’s nothing I can do. Nobody touches my work in my presence or else I’ll beat him to death. That’s just my nature. I don’t care if it’s the emperor of China or if its Arnold Schwarzenegger, I’ll come from behind with an iron rod. I’ll get him down.

But that’s not the problem. My concern isn’t to provoke people, my concern is to deliver quality, that’s all I can do. Sometimes it makes me feel ill, or unloved. I put all my passion and commitment into it, at the very least you should respect my work, even if you don’t like it. But people are too stupid for art, for great art. You can write that in bold letters: The people are too stupid for great painting.