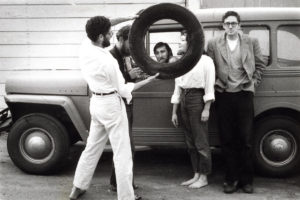 The innovative, iconoclastic curator Walter Hopps (1932-2005) was one of the most influential figures in mid-to-late-twentieth-century American art. He founded his first gallery in L.A. at the age of twenty-one and, at twenty-four, opened the Ferus Gallery with the artist Ed Kienholz, where they turned the spotlight on a new generation of West Coast artists.  Later, in the sixties, at the Pasadena Art Museum, Hopps mounted the first American museum retrospectives of Marcel Duchamp and Joseph Cornell. For “The Dream Colony: A Life in Art,” out on June 6th from Bloomsbury, the New Yorker fiction editor Deborah Treisman, who worked with Hopps in the nineteen-nineties on the art and literary magazine Grand Street, edited and adapted his interviews with the artist and editor Anne Doran. In this excerpt, Hopps describes meeting two little-known artists who would become leading figures in the field.

Toward the end of the fifties, the art world had begun to divide.  Abstract Expressionism was still alive and well, but some of the new artists were starting to look for different ways to proceed.  Robert Rauschenberg emerged, inspiring two of his contemporaries, Jasper Johns and Cy Twombly.  And then we began to encounter the next wave: a new form of image-based art that would eventually be called Pop, and a new era of abstraction.  While looking for artists to show at the Ferus Gallery, Irving Blum and I had met an art dealer named David Herbert, who had worked for the Poindexter Gallery and Betty Parsons and Sidney Janis, and was setting up his own gallery in New York.