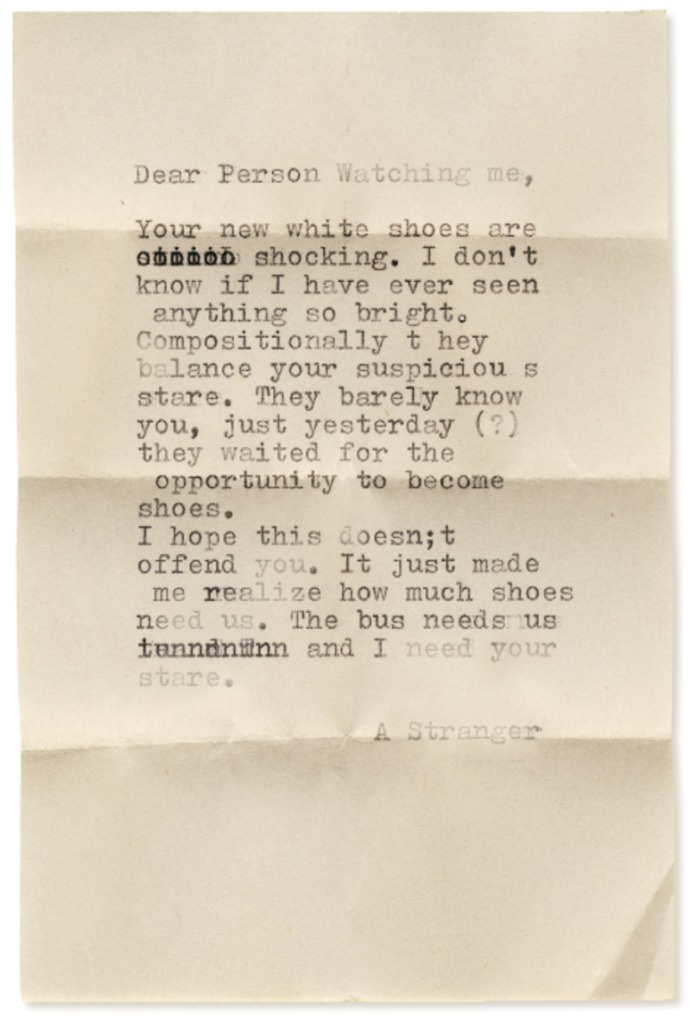 In 1990 Geoffrey Farmer started writing notes to strangers on public buses. In those days, in Vancouver, buses issued paper ‘transfers’, a time-limit punched into its thin newsprint, which enabled passengers to change buses and continue their journey. Farmer rode the bus with an old typewriter on his lap, rolled the transfers into its creaky frame and tried to write a tiny note-poem for a stranger before he or she alighted. One of them read, ‘I can see the dog you / are hiding in your bag. / I wish we were in Paris. / Thank You, / A Stranger’. The slumber of the daily commute was ruptured by a random act of empathetic weirdness.

Notes for Strangers, created while the artist was a student at Emily Carr College of Art & Design, heralded a set of ideas that Farmer has been working on for almost 30 years: ephemerality, chance encounters, connections across space and time, a desire to communicate. Yet, less than a year later, his worldview was changed completely: between 1990 and 1991 Farmer attended the San Francisco Art Institute (SFAI). The models he’d encountered at art school in Vancouver, where detached intellection was prized above all else, were exposed as a particular, limited way to be an artist, rather than the only way. When I talked to Farmer about his plans for the Canadian Pavilion at the Venice Biennale, it was not the pavilion or even the work that first came to his mind, but a series of vivid recollections of that transformative year.