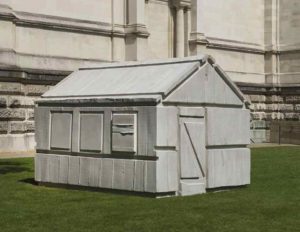 From Rachel Whiteread’s mummified air to the burial rituals of the mysterious Scythians.

On very special occasions, Tate Britain’s 1979 extension is opened up into a vast, single, top-lit space. This is the case for Rachel Whiteread’s career survey (until 21 January 2018) of 30 years of work, from breakthrough sculptures made the year after she graduated from art school, to pieces fresh from the studio. Whiteread’s work has been remarkably consistent. For Closet (1988), she cast the interior of a humdrum wardrobe in plaster and covered it in black felt. Ever since, she has been “mummifying the air”, as she once put it. The point of the Tate exhibition, according to its curator, Ann Gallagher, is to show that “through consistency of process, there’s an incredible variation”.