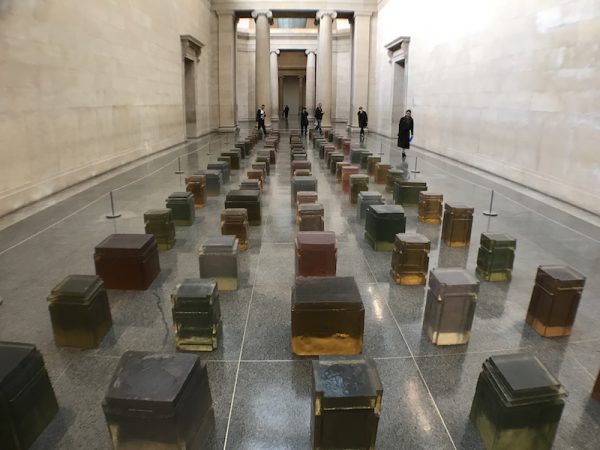 Trying to get hold of Rachel Whiteread to talk about her new exhibition at Tate Britain, her largest to date, is rather like attempting to gain an audience at the White House. The Tate only gives me a strict half an hour but she walks me round the show before it opens as the technicians beaver away, happy that I’m familiar with her work and knew her late mother Pat, a little, herself a serious artist.  She is unpretentious and friendly and when we meet, dressed casually in ubiquitous art black. She’s naturally reticent – blushing a little – when I say I know she hates talking about her work. But there’s also a steely professionalism. When I apologise for taking notes and not using a tape recorder she says: “Oh that’s fine. I write things down too.”

I first came across Rachel Whiteread’s work in the early 1990s. It was intelligent, quiet and thoughtful, at odds with the razzmatazz of many of her contemporaries, the other Young British Artists shocking their way into visibility. In contrast, she was casting the inside of wardrobes, dressing tables, and hot water bottles, that looked like the headless torsos of dead babies. Dreamy, ruminative and poetic her work explored how physical objects acted as Proustian catalysts to retrieve what is so often only half remembered, what lurks just below the plimsol line of consciousness. And then there was House, created in 1993 in a small park in the East End of London, which existed for a mere 80 days. A caste of the last surviving end-of-terrace that was about to be demolished, home of Sydney Gale a former docker, which was a direct connection to an older, disappearing way of life. Using the building as a mould, Whiteread imprinted fireplaces, cornices, and cupboards to create a stark mausoleum that ensnared the ghosts of its past inhabitants like flies trapped in amber. That year she was also the first woman to win the Turner Prize and a few years later made Embankment constructed of 14,000 polyethylene cases of cardboard boxes stacked, one on top of the other, that filled the Turbine Hall of Tate Modern and spoke, obliquely, of global warming. And then there was her controversial sculpture commissioned for the Holocaust Memorial 2000, in Vienna.