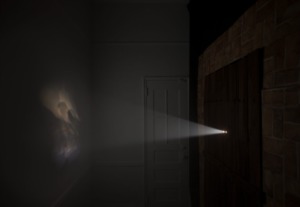 By now, the story has become a legend: in 1917, artist Marcel Duchamp took a urinal, signed it with a pseudonym, and submitted it for an exhibition put on by the Society of Independent Artists—who rejected it. Fountain, as he winkingly titled the urinal, was one of his ready-mades: a manufactured object that he deemed artworks in an effort to throw off the yoke of what he called “retinal art” in favor of a more conceptual and cerebral one.

Duchamp was good at gestures. Just six years after the Fountain controversy, he announced he was quitting the art world and would devote the rest of his life to his other passion, chess. Most people believed he had. But when he died in 1968, at the age of eighty-one, his grandest gesture was revealed: Duchamp had been constructing an artwork in secret for twenty years. He left it behind in his studio on Manhattan’s East Eleventh Street—a mysterious, life-size tableau. It featured a realist sculpture of a naked woman lying on a bed of twigs and leaves with her legs spread open. She could have been dead or unconscious, except that her left arm held aloft a gas lamp, behind which glowed a landscape of colorful trees and a waterfall. The uncanny scene was visible through a cutout in what seemed to be a brick wall, which itself was fronted by an old wooden door with two peepholes in it. Looking through the peepholes was—and still is—the only way to see the tableau.