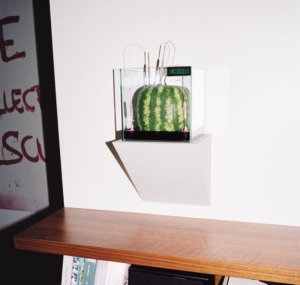 At a time when art is as commodified as oil, a few collectors have chosen to buy works that are messy, perishable and threaten to take over their lives.

PAUL LEONG, A YOUNG banker who lives in downtown Manhattan, spends an unusual amount of time thinking about square watermelons. He wonders where to get them, how long they’ll last, when they’ll next be in season. This is because two years ago, Leong bought a work by the Los Angeles-based artist Max Hooper Schneider called ‘‘Genus Watermeloncholia’’: a bioengineered square watermelon in a glass case filled with water. The watermelon is connected to an LED sign that is positioned so that it appears to be transmitting the watermelon’s depressive thoughts: ‘‘This is all a mistake,’’ for instance. Leong doesn’t quite know why he bought it, only that he was curious how the work might look in his apartment, with its sculpture of a miniature tank by Lutz Bacher mounted to seem as if it’s driving up the wall over the entrance to his bedroom, or Stefan Tcherepnin’s life-size Cookie Monster statue, which dominates the guest room.