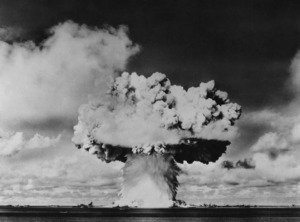 The Apocalypse has long been a staple of American film, pulp fiction, popular culture, and high art and literature. Lately it has also been looming large in our political consciousness. From a presidential adviser who is convinced we have entered the fourth and final “turning” in human history to charges by environmentalists that our withdrawal from the Paris climate accord may push global climate change to a tipping point, the Trump era has so far been a time of dark forebodings and doomsday rumblings. At the same time, the art world has been facing its own version of Armageddon with the threatened demise of federal arts funding, the uncertain future of the NEA, and renewed attacks on the First Amendment.

Conner, Shaw, Pettibon, and Wojnarowicz burrow into moments in America’s recent past when the forces of darkness seemed ascendant. Conner’s reflections on the allure of nuclear annihilation during the Cold War, Shaw’s fascination with religious sects that resist the pull of modernity, Pettibon’s exploration of the rubble left by the failure of the 1960s utopian dreams, and Wojnarowicz’s evocation of the AIDS catastrophe of the 1980s all belong to a tradition of anxiety rooted in Apocalyptic thinking. But they also remind us of the ambiguity at the heart of the eschatological narrative. The End looms, but there remains a large space for human agency. A sense of doom may be eternal. What matters is what we do about it.