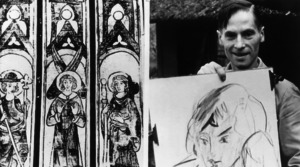 Confirming the authenticity of an artwork crucial before buying. We give 5 key factors to consider and uncover some of the most shocking forgery cases in art history

The notion of a forger conjures up a the image of a cartoonish criminal painting a knock-off da Vinci in some kind of darkened attic. But many forgers are frustrated artists in their own right, struggling to make a living by imitating others.

In fact, before he became an acclaimed Renaissance artist, Michelangelo made his money forging ancient Roman sculptures. He created a sculpture out of marble, intentionally broke it and then buried it in a garden. He later dug up the sculpture, claiming he had discovered a lost Roman antique, and sold it to an unsuspecting Cardinal. Years later, the Cardinal discovered the sculpture was fake, but rather than chastise Michelangelo or revoke his payment, the Cardinal recognized the genius talent the young artist possessed, and invited him to Rome, where his career soon blossomed.