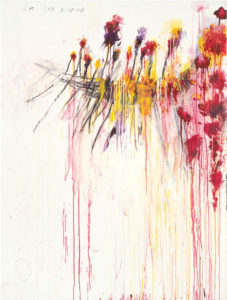 The first time I saw Cy Twombly’s aphrodisiacal paintings, I felt the way Patti Smith felt when first hearing the Rolling Stones: “I was doing all my thinking between my legs.” Something unrecognizable and distorted within me quivered. Twombly’s fevered phosphorescent blooms of runny jellyfish chrysanthemums with elongated, pulpy, tentacle-like sacks dripping down; his iridescent storms of inchoate cryptographic scribbles, floral scrawls, jittery jutting lines; pustules rising and falling like raw nerve endings, flying vagina dentata, plaited anuses, priapic phalli spouting involuntarily or drooping defenseless, and what his closest reader, MoMA’s late Kirk Varnedoe, called “anteater tongues” — all of it metamorphosed into my own inner Kama Sutra of urge. Sensory networks lit up; a new barometer fluctuated. It was abstract yet explicitly erotic. I was in voluptuous rut. But something like gravitas and immensity was preponderant within me, too.

Somehow, by deploying only the barest rudiments of art — jots, dots, lines, doodles, dashes, loops, scribbles, scratches, little glyphs, weird ruins, rising Gothic skeleton structures, ziggurats, wobbly frame shapes, and (perhaps more effectively than any Western artist who ever lived) hard-to-read handwritten words and phrases, whole poems, and the names of ancient poets and places — Twombly has been able to make an art that rises to the level of epic poetry and fills you up with the sweep of history and fiction. He’s one of the few 20th-century painters who produces some of the same capacious sensations we get while reading Virgil, Homer, Sappho, Keats, and others. A silent sonorous world opened. Twombly brings mythos and antiquity together with Smith’s “thinking between my legs,” and an undertow of the elemental interiority and abjection of Francis Bacon.