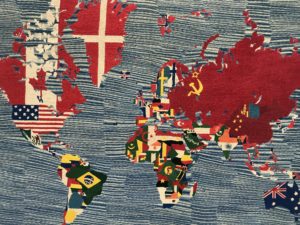 An essential introduction to Italy’s most collectible names ahead of April’s modern and contemporary art auctions in Milan.

Born in Turin in 1940, Alighiero Boetti is today recognized as one of Italy’s most important conceptual artists, and was a leading figure in the Arte Povera movement that revolutionized contemporary art at the end of the 1960s. As a teenager, he dropped out of business school to pursue art, discovering work by painters including the German artist Wols and creating oil paintings whose thick impasto resembled the works of Nicolas de Stael.

In the 1960s, after a period spent living in Paris, Boetti returned to his hometown of Turin, joining a close-knit circle of artists that included Michelangelo Pistoletto and Lucio Fontana. Together, they founded Arte Povera, or ‘poor art’ — a term coined in 1967 by art critic Germano Clement, to describe the group’s use of abandoned industrial materials and everyday objects. Boetti’s unconventional materials included biro pens and the postal system, addressing letters to himself from various cities in Italy.

Boetti’s earlier postal-system set the tone for works that followed, which returned to geography and systems of classification. Among his most famous series is Mappa: a series of embroidered world maps which, from their beginning in 1967 until Boetti’s death in 1994, charted the changing positions of countries following geopolitical crises.