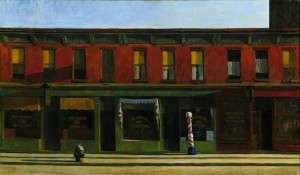 Did American painting exist before Abstract Expressionism? Not such a daft question if we don’t get to see any of it.

Many will still argue that American painting before mid-century, with just a few exceptions, is really too derivative, too backward-looking to get excited about, and that it was photography that American artists really excelled at in the first half of this century. Furthermore, it was the intellectual exodus from Europe to New York before the outbreak of the Second World War that really gave American art its injection of life-blood.

American photographers certainly excelled. But here’s a selection of paintings by artists who also excelled in the first few decades of the 20th century – though not all follow the precept of being rooted in American experience etc.