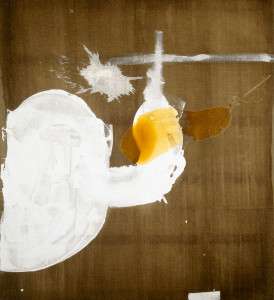 At the moment, Julian Schnabel’s painting seems to be the art that dares not speak its name. Its influence is widely visible but rarely cited. You can see it in the work of artists from Joe Bradley to Oscar Murillo and all sorts of painters who emphasize chance or accident and like to work big, using unconventional materials.

In a sense, Mr. Schnabel was Jeff Koons before Jeff Koons. In the early 1980s he signaled a change in attitude toward art-making — as Mr. Koons would in the late 1980s — and then became a vilified lightning rod. Along with other neo-Expressionists like David Salle, Eric Fischl and Jean-Michel Basquiat, Mr. Schnabel accomplished a liberating take-back for painting. His generation retrieved elements banished during the austere 1970s. They included narrative, language, psychology, the figure (or body) and explicit references to the outside world and past art, which had found refuge with Conceptual, performance, video and photo-based artists. It was as if the painters looked around and thought, if nonpainters can have it all, why not us?