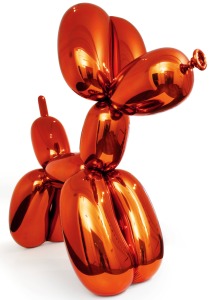 In May 2013, German artist Gerhard Richter broke his own record when his 1968 painting “Domplatz, Mailand,” which looks like a fuzzy black-and-white photograph, sold at auction for $37 million, the highest amount for any living artist.

It was a record he held for six months, until Jeff Koons’ “Balloon Dog” smashed it, selling for $58.4 million at Christie’s.

The number staggered even the auctioneer, Jussi Pylkkanen. “We are in a new era of the art market,” he said.

A new era is one way to put it; another would be a world gone mad. As the .00001 percent run out of mansions to buy, they’ve poured their wealth into art. And not art many would find, well, good.  Read on …