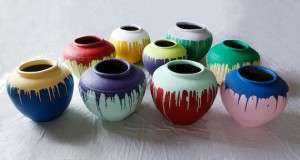 But we’ll start with 1993. That year, Chinese artist Ai Weiwei returned to Beijing from New York to be with his ill father. He survived as a struggling artist by dealing in antiques, including a trove of Han dynasty urns he acquired in order to turn around and sell them. But he made them into art, too. He reassembled old furniture into sculpture andsplashed the red script of Coca-Cola and other Western trademarks onto antique pots.