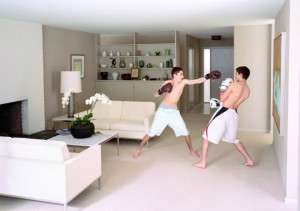 There is good deal of irony in the manner in which Vancouver’s Jeff Wall presents his photograph “Invisible Man” by Ralph Ellison, the Prologue (1999–2000)—printed on a transparency and mounted on a light box. “The large-scale image is illuminated from behind by fluorescent lights, which Wall began using after seeing light-box advertisements in the late 1970s,” according to the Museum of Modern Art’s website.

In this image, Wall proves a careful student of Ellison’s 1952 novel and its anonymous narrator, who describes his subterranean home, or “hole,” as being “warm and full of light.” The figuratively invisible narrator steals from Monopolated Light & Power to illuminate his 1,369 lights. “I’ve wired the entire ceiling, every inch of it,” Ellison writes. “And not with fluorescent bulbs, but with the older, more-expensive-to-operate kind, the filament type.”

It’s not clear if Wall’s photo contains precisely 1,369 bulbs, but even if it is approximate, the ceiling is covered with lights. Yet Wall uses the very fluorescent bulbs that Ellison’s narrator sought to avoid to illuminate his transparency. Where the invisible man is trying to rack up the biggest bill he can for the Man, Wall is fine with lighting his works on the cheap.