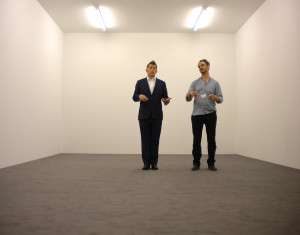 At the giant Art Basel fair that opens tomorrow in Switzerland, the best thing to be seen has nothing to do with the thousands of deluxe art objects being offered on the sales floor. It sits in a building off to one side, where, as part of a performance-art project called “14 Rooms,” the brilliant artist Tino Sehgal is presenting a piece starring the roster of dealers whose job it is to sell his work. Putting them on stage two at a time for something like an hour or more per pair — they spell each other, relay-race style, over a nine-hour shift — Sehgal gets them to talk about the tricky act of selling performance work like his, including of course the actual performance they are a part of in Basel. This new work thus becomes a sort of sales pitch for itself.