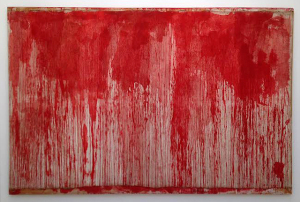 Its Wikipedia entry calls it “a short and violent movement,” and even compared with the aesthetic extremes of the 1960s, the unrelenting art of Vienna Actionism stands apart. After the passage of fifty years, the questions it raised about the limits and origins of art remain no less troubling or closer to resolution.

The four artists who made up the core of the movement — Günter Brus, Otto Muehl, Hermann Nitsch and Rudolf Schwarzkogler — witnessed the ravages of World War II and its aftermath, though only one of them, Muehl, was old enough to fight, entering the Wehrmacht in 1943 at the age of 18.

In the decades following the war, they pursued an idiom that evolved from Abstract Expressionist-influenced paintings to blood-drenched rituals that inverted every sexual, social and hygienic taboo. Their art directly confronted the savagery of war and made a mockery of the entrenched political and religious conservatism that clung to Viennese life despite the cataclysms of Fascism and the Anschluss.

In many ways, their art is of a piece with the tragicomic grotesqueries rampant in the work of generational peers such as the dramatist Fernando Arrabal, the composers Krzysztof Penderecki and Peter Maxwell Davies, the filmmaker Alejandro Jodorowsky and the choreographer Hijikata Tatsumi.