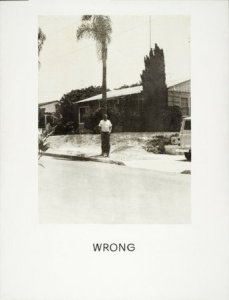 When John Baldessari started creating his text paintings in the mid 1960s, only a handful of artists had ever trifled with the idea. There were Roy Lichtenstein‘s paintings from comics, and the Cubists had integrated newspaper clippings in their work, but nobody had been brave enough to exhibit paintings that simply offered text.

For one of his early text paintings, Baldessari chose a simple phrase that offered a perfect example of the layered meanings his work is often able to express with extremely limited means: “Pure Beauty.” Presented against a stark, dully monochrome background, the piece was a challenge to viewers who hoped to find painterly drama on the canvas—and, simultaneously, it was a critique of those Minimalists who at the time were stripping all the fun out of art. Either way, Baldessari put himself at the center of the debate about what qualified as art, and quickly gained a reputation for intelligent work that was at once controversial, quirky, humorous, and groundbreaking.

Today, Baldessari is considered one of the fathers of Conceptual art—not only for the influence of his art, but also for his four decades as a leading instructor at CalArts and UCLA—and he remains one of the most well-respected artists alive.