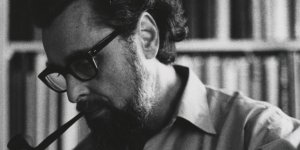 If you could have dinner with just one 20th-century art historian, you might want to choose Leo Steinberg (1920-2011). Known for delivering garrulously wide-ranging lectures and papers that were as lucid as they were revolutionary, he was also admired for his wit, dropping in enough jazzy lines that Woody Allen could have cherry-picked them for material.

The following is a glimpse into his dazzling mind.