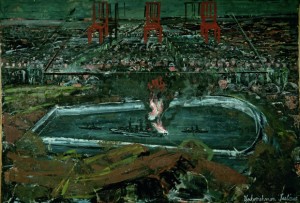 Kiefer uses a vast panoply of materials in his art, each of which have intricate symbolic meanings. Studiously parsed, they trigger a kind of spiritual-historical giddiness. There is the straw, for instance, that symbolises the hair of the German prison guard Margarethe in Paul Celan’s poem “Death Fugue.” There are the seven flames that represent Margarethe’s antagonist in the same poem, the concentration camp prisoner Shulamith, reduced to ashes in the furnaces. There is the lead Kiefer uses, again and again, to invoke the weight of history and the flux and potential of the human spirit. There are the sunflowers and crows that refer to specific paintings by Van Gogh, and the concrete that connects in his mind with spiritual striving, and with the modernist architect, Le Corbusier. On it goes. Sometimes, the allusions feel pointed, precise, and powerfully charged. At other times, it’s all quite bewildering.

Overwhelmed and confused, perhaps, by his work’s undisguised ambition, critics have occasionally accused Kiefer of getting into an uncomfortably intimate dance with Nazi tropes. When he showed his work, alongside his friend Georg Baselitz, in the West German Pavilion at the Venice Biennale of 1980, one critic, Werner Spies, accused Kiefer of inflicting on the public “an overdose of the Teutonic.”