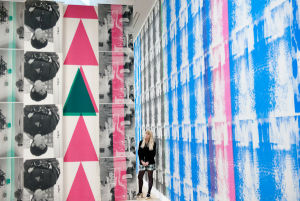 This year’s Turner Prize shortlisted artists are hooked on materiality. Not some slick, seamless production-value fetishism geared for maximum visible impact, but almost the exact opposite—a thoughtful, often overly self-conscious, politically inflected take on materials and media, on production and reproduction, in which the frictionless transparency of images is jammed by the clunky inertia of obdurate old tech. The kind of old tech that slows things down and makes you mindful that you’re not just looking at all of this in a JPEG on Tumblr while sitting on your couch in your underpants.

Campbell deserves to win, for the sheer scale of his critical interests and the restless reinvention of his formal and narrative resources. But it would have been great to see an artist like him faced with artists of equal scope but on entirely other trajectories, rather than this narrow serving of middle-range curatorial currencies. It isn’t the artists’ fault, of course; it’s a product of the process itself, which suggests that there needs to be some serious self-scrutiny about the risk of cliquishness when it comes to the tastes and affiliations of the selection panel. If the Turner Prize is starting to feel more parochial than national, it’s because its stated ambition—recognizing an outstanding exhibition by a living artist from Britain—isn’t being taken seriously enough.