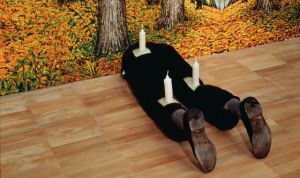 Robert Gober’s retrospective “The Heart Is Not A Metaphor,” which opens on October 4 at the Museum of Modern Art in New York, is a strange and moving survey of domestic unease, seemingly pointless labor, and creeping horror, among other things. You enter the exhibition past a pair of very different works: “X Pipe Playpen,” 2013-14, a sculpture of a child’s crib bisected by an industrial pipe; and an untitled painting from 1975 depicting a suburban house, its lawn criss-crossed with ragged shadows of barren trees. The two pieces feed each other — the fairly straightforward, even bucolic scene can’t help but emit sinister vibes next to the modified baby furniture, a symbol of security gone awry. You carry that feeling of molested comfort through the rest of the show, with its sinks and legs and re-contextualized slices of mundane architecture.

The small, early graphite drawings and paintings here could constitute a show of their own, from depictions of dish racks and other household products to one tiny canvas that belies Gober’s allegiance to Bess: an undefined orifice, populated by bats hanging from nails, being pried open by strange, green hands. The latter work hangs next to a sculpture of a petite bed, child- or monk-sized, neatly made. That juxtaposition is a nice summary of Gober’s retrospective in general: An invitation to relax, swiftly pierced by a jab of terror.