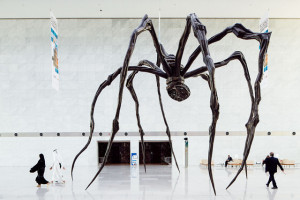 Seventy kilometers west of Doha lies the Brouq Nature Reserve, a sand spit in the Gulf of Bahrain where Qataris like to camp and wax nostalgic about their grandparents’ nomadic Bedouin lifestyle. To get there, you drive an hour along a highway bordered by electrical towers and plastic barriers that prevent blowing sand from drifting onto the road. In contrast to the capital’s futuristic skyline of skyscrapers and construction cranes, the open desert is bleak and hazy; oil wells flare on the horizon, and the only other landmarks are a hospital catering to petroleum workers, a ruined 18th-century fort and an underpass for camels.

Known for its lonely beaches and the defunct film set of an old pearl-fishing village, the reserve last spring became the permanent backdrop for ‘East-West/West-East,’ a site-specific sculpture by Richard Serra, Bloomberg Pursuits will report in its Autumn 2014 issue. The installation is part of a high-stakes campaign launched by the Qatari government to educate its citizens about contemporary art.