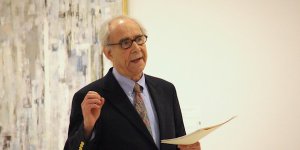 Irving Sandler is an artists’ art historian. In contrast to other prominent midcentury art critics—like the New York Times’s John Canaday, who warned him against fraternizing with artists for fear of impairing his critical distance—Sandler purposefully immersed himself in his subjects’ milieu, first in his days as a young reviewer for Artnews and later as an art historian. Summing up his writing career in 2006, Sandler proudly wrote: “The thread that runs through my writing is a concern for the intentions, visions, and experiences of artists.”

What follows is a brief look at Sandler’s career, and what makes him tick.