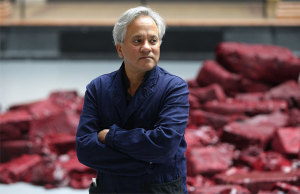 The sculptor Anish Kapoor, no stranger to grandeur, has been awarded a one-man show at the Château de Versailles, reports the New York Times. The show, running from June through October 2015, will follow similar shows in the same space by Takashi Murakami, Joana Vasconcelos, and Jeff Koons.

According to Catherine Pégard, director of the Château de Versailles, Kapoor was chosen “because he has something particular to say in this setting,” she told the Art Newspaper. Certaintly it has nothing to do with Kapoor’s sculpture constructed for Paris’s annual Monumenta show in 2011, which, according to the Times, “attracted more visitors during its six-week stint that any other Monumenta show.”