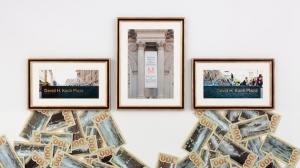 Anyone in need of a potent antidote to the feeding frenzy at Art Basel Miami Beach last week should head right now to Paula Cooper Gallery’s second-floor space at 521 West 21st Street in West Chelsea. On view there is a solo show by the German–born, New York–based artist Hans Haacke, whose six-decade career is a singular case study in how to resist and attack, determinedly and elegantly, the machinations and overproduction that have defined the art market in recent decades.

Another reason to visit: Haacke shows are very rare occurrences. His last one-person exhibition in New York, where he has lived since 1965, was a survey that dealer Elizabeth Dee’s X-Initiative presented in 2009, and his last presentation of new work here was the year before, at Cooper, a full six years ago. This one is occurring just as his career reaches a new—and, one might say, unlikely—high point.