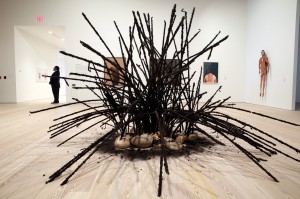 From outside, Renzo Piano’s new Whitney Museum of American Art, set beside the Hudson River, has the bulk of an oil tanker’s hull. Inside is entirely different. The galleries, with high ceilings, tall windows and soft pine-plank floors, are as airy and light-flooded as the 19th-century sailmaker’s lofts known to Herman Melville, who worked as a shipboard customs inspector where the Whitney now stands. Art feels at home in them, and the work in the museum’s top-to-bottom inaugural show is homegrown.

In a real sense, the new building is the least of the Whitney’s concerns. For better or possibly worse — there have already been protests over its proximity to a pipeline carrying fracked fuel — it’s a done deal. If it lets art put its best foot forward and gives it an effective stage for shaping culture, it’s been done well. Besides, most museums tend to turn into “classics” within a generation or two. And always, it’s the institutional thinking, inherently political, that matters — determining first what and who goes into the collection, then what goes into the public spaces and lastly what new, alternative eyes will be coming on board to oversee these things. With the move, the new Whitney makes a promising start. It shakes art and itself up, bracingly, at least a little. Once the opening parties are over, I want it to do much more, to become the living museum of history-in-nowness this city has been waiting for.