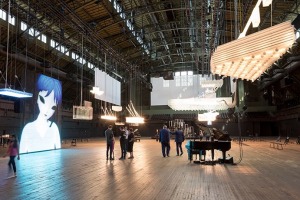 “The architecture becomes semi-conscious,” said Philippe Parreno during a morning press conference debuting his new installation for the Park Avenue Armory, which opens today and is on view through August 2. I believe he followed up this building-coming-alive statement with a comparison to the work of Philip K. Dick — the artist’s thick French accent was a bit hard to parse — an appropriate sentiment for a thrilling exhibition that shimmers between genres, from sci-fi to fantasy, children’s adventure to horror. “H {N)Y P N(Y} OSIS” is near perfect — certainly good enough to excuse its typographically obnoxious title, and maybe good enough to warrant the consideration of curator Tom Eccles’s breathless assertions that Parreno is “one of the most important, if not the most important, artist of his generation,” and the contemporary-art corollary to Marcel Proust.

Parreno doesn’t hypnotize the viewer so much as co-opt him, casting a sensory spell that is lushly atmospheric and intentionally disorienting. Unlike his peer (and former collaborator) Douglas Gordon’s outing in this same venue — from which “H {N)Y P N(Y} OSIS” essentially samples, selectively, with the Steinway performances — Parreno’s exhibition rewards patience. There’s a benefit to letting go, becoming an empty shell to be filled by light, sound, sensation.