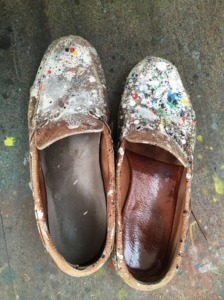 A towering figure of the postwar era, Ellsworth Kelly charted a singular and often solitary artistic path. He ventured to Europe twice—first as a camoufleur for the Ghost Army during World War II, then as a questing painter on the G.I. Bill—and brought back a bright and lively new style of American painting, seductive in its grace and generous in its joy. Steeped in the intellectual rigor of Malevich yet bursting with the splendid colors ofKandinsky and Léger, Kelly’s shaped, often monochromatic canvases and reliefs were unlike anything else when they debuted in the 1950s.

This summer, to mark the completion of Phaidon’s definitive Ellsworth Kelly monograph, Artspace enjoyed the privilege of being one of Kelly’s guests, sitting down with him in his spare, light-flooded studio to discuss his art, his career, and his inspirations. Here, in one of the artist’s final interviews,Artspace editor-in-chief Andrew M. Goldstein spoke to Kelly about his life’s work.