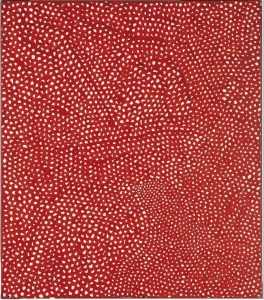 Florence Waters takes a closer look at the life and work of the woman behind the dots — the world’s most popular artist of 2015. Illustrated with works offered in our forthcoming Post-War and Contemporary Art auctions in London.

1. Painting became an act of rebellion for Kusama when she was just a child. Her mother told her she was not allowed to paint and took her inks and canvases away.

10. The search for stardom is part of her work and story. Kusama often describes how she craved fame when she arrived in New York. As a woman forging a career in an alien country harbouring post-war resentment towards the Japanese, she had to work with fierce determination to get the attention she craved. At the Venice Biennale in 1966 she even handed out flyers featuring Sir Herbert Read’s poetic description of her work as ‘images of strange beauty’ that ‘press … on our organs of perception with terrifying insistence’.