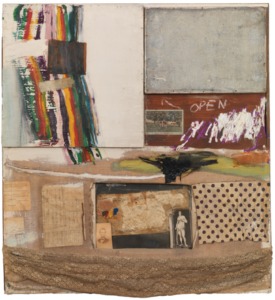 Robert Rauschenberg kept only one major example of his earliest, most influential body of work, the Combine paintings he made between 1954 and 1961. Short Circuit (1955) is similar to other works from the period; it incorporates sculptural elements with both painting and drawing and combines abstraction with images and objects plucked from the young artist’s world.

Short Circuit is made of classic Combine ingredients: thick brushstrokes, a lace curtain, a scrap of polka-dotted fabric, postcard images of a Renaissance painting and Abraham Lincoln, a word scramble, a program from an early John Cage concert, and a Judy Garland autograph, all affixed with paint to a chassis made of scrap wood and cupboard doors. Behind those doors Rauschenberg hid two smaller paintings, by two then-unknown artists: one was a landscape by his ex-wife, Susan Weil, and the other was a U.S. flag by his then-partner Jasper Johns.

But what happened to John’s missing U.S. flag …?