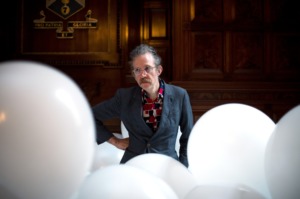 “It’s pretty remarkable the armory is letting us do this,” observed Mr. Eccles, who assembled the exhibition in partnership with Hans-Ulrich Obrist, artistic director of the Serpentine Galleries in London.

Actually, the exhibition is in the spirit of earlier armory shows spotlighting off-center artists like Paul McCarthy and Christian Boltanski — both of which Mr. Eccles was involved in producing.

“The Back Door” is also the title of Mr. Creed’s exhibition, a sprawling affair that occupies the armory’s entire main floor, including not just the drill hall and the small, bunkerlike rooms that flank it but the grandly decorated, late-19th-century period rooms on the building’s Park Avenue side. This is Mr. Creed’s biggest exhibition in the United States, although he won the Turner Prize in 2001 and his work has been shown extensively in Britain, with numerous solo shows at Tate Britain and a career retrospective two years ago at the Hayward Gallery in the Southbank Center in London.