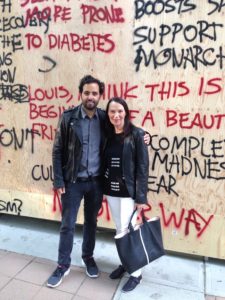 For his first show at Hauser & Wirth, which opened Wednesday, June 29, Mexico City- and London-based artist Stefan Brüggemann covered the walls of the first floor of the gallery’s Upper-East-Side outpost with spray-painted scareheads ripped from recent news stories and quotes culled from classic films. Part of his ongoing “Headlines and Last Line in the Movies” series, the text ranges from pre-Brexit market predictions to the famous last Rosebud-referencing speech in “Citizen Kane.” The phrases overlap, both visually and contextually, making it difficult to tell what’s news and what’s cinema. Eventually the drama of the world becomes indistinguishable from the drama of the screen.

More than anything, Brüggemann’s work is concerned with time. The news stories from which he appropriates his headlines appeared just last week. After the exhibition is closed, the gallery walls will be painted over, and the first-floor texts will be gone. For Brüggemann, the temporary nature of his installation reflects the way we receive information now: quickly, constantly. “So fast it becomes static,” says the artist.