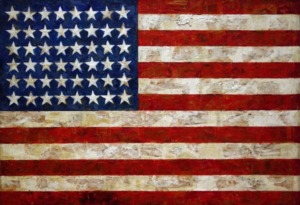 Each year, artnet News rounds up the art world’s top-performing artists at auction, across categories. But as the 2016 results come in from the first half of auction season, not much has changed since we last mined theartnet Price Database to identify the most expensive living American artists of 2015—which isn’t a good thing.

Similar to artnet News’s last list featuring the top 10 most expensive living British artists, the lack of diversity is evident, and the problem is no different on this side of the Atlantic. David Hammons is the only person of color on the list, and Cindy Sherman has been knocked off, leaving Cady Noland as the lone female artist in this pricey deck of cards. There are also some surprises, though, as Ed Ruscha‘s 1963 painting, Smash, is only a few million behind Jasper Johns‘s iconic Flag (1983) artwork. Nevertheless, we’re waiting for some new voices to rise to the top in 2017.