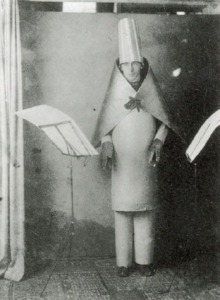 “How does one achieve eternal bliss? By saying dada,” proclaimed the poet, musician, and theater producer Hugo Ball in the summer of 1916, as World War I raged on. “How does one become famous? By saying dada…How can one get rid of everything that smacks of journalism, worms, everything nice and right, blinkered, moralistic, Europeanized, enervated? By saying dada.” In this spirit of anarchy, a new artistic and literary movement called Dada burst forth in Zurich 100 years ago.

Dada’s centennial is being celebrated across the world this year. Zurich has planned over 150 events at venues throughout the city, including the Cabaret Voltaire—which was founded by Ball and served as the birthplace of the movement. In New York, MoMA opens “Dadaglobe Reconstructed,” an exhibition bringing together works by more than 40 artists that were originally made for an unrealized anthology conceived by poet and Dada co-founder, Tristan Tzara.

So what’s all the fuss about?