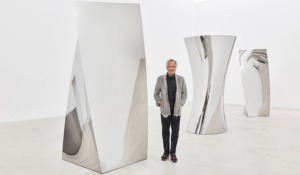 At Kukje Gallery, three formidable, twisted mirrored columns display warped visions. “It’s a stupid, simple idea, but it does something—it becomes something else,” said Kapoor, by way of introducing the latest additions to his “Non Objects” series, which are the centerpiece of the current show. He was referring to the 90-degree twist, which transforms mundane columns into strangely unknowable objects with unexpected concavities and edges that seem to shift as you behold them.