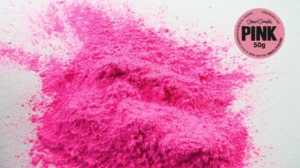 Earlier this year it was revealed that sculptor and color-hoarder Anish Kapoor had been given exclusive rights to the blackest black in the world. Called Vantablack it was developed by British company NanoSystem—specialists in nanomaterials—who created it for military and scientific uses. However, after Kapoor contacted the company he was allowed to be the only artist in the world given permission to paint with it. Created with carbon nanotubes it is able to absorb 99.96% of visible light.

So if you wanted to get hold of some yourself, possibly to turn your living room into an abyss, that wasn’t happening. Kapoor also told The Guardian there’s an issue with producing sufficient quantities to paint with anyway because it’s so dense. Still, if you felt slighted by the exclusivity bestowed on Kapoor, then you might enjoy this retort by British artist Stuart Semple.

The World’s Blackest Black Meets the Vacuum of Space