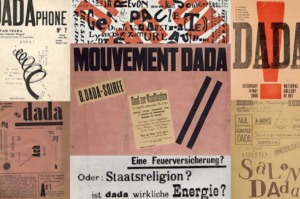 As in every human endeavor when two strong personalities meet, opinions may clash and an argument often ensues. The same applies to the art world. Dada Manifesto is not a singular writing; over the years several were made, including perhaps the best-known by Hugo Ball and Tristan Tzara. Ball wrote his manifesto in 1916, and dated it July 14, while Tzara’s came a few years later, in 1918, on the 23rd of March. Both Manifestos are explanations of the Dada movement and its goals, but the content differs as long as the modes of spreading the movement throughout Europe and ultimately world, were concerned. These differences actually led to the confrontation between the two authors, which resolved when Ball left Zurich, a city where the Dada movement was initially founded.[1]

The creation of Dada came during the First World War when young creatives living at the time in neutral Switzerland decided to take their aim at the perceived ills of the modern time that led to the war, such as bourgeoisie and nationalism. Later to be known as Dadaists, these creatives looked for alternative modes of social functioning that would disengage them from the unsavory reality of the times, and which would produce a new social ordering more aligned with their desires and wishes. The founding moment for the movement came on February 5, 1916 when Hugo Ball and Emmy Hennings established Cabaret Voltaire in Zürich. Other members of the movement from its initiation were Tristan Tzara, Hans Arp, Richard Huelsenbeck, and Marcel Janco. Dada was influenced by Cubism, Expressionism, Futurism, and Constructivism, and shared with other avant-garde movements the urge to change the world. Ball and Tzara soon became the leaders of the movement, but their collaboration did not managed to surpass the differences in opinion detectable in Dada manifestos they wrote.