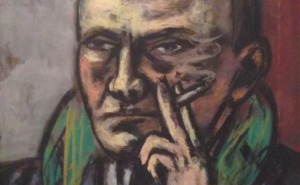 Beckmann’s “Self-Portrait with Cigarette” belonged to the Metropolitan Museum until 1971, when its deaccession set off a series of disputes that reshaped museum practices.

The moment Adolf Hitler’s voice burst over the airwaves one summer night in 1937 declaring steadfast opposition to so-called “degenerate art,” 53-year-old painter Max Beckmann knew his time in his native Germany had come to an end. Finding life under such circumstances increasingly untenable, Beckmann, with his wife Quappi at his side, fled the country that had imbued him with a love of painting, brought him as a volunteer hospital steward to the front lines of World War I, and nurtured his career as an artist — until the ascendency of Hitler’s Nazi regime snuffed out any hope he had of continuing to work in the doomed republic.

Self-imposed exile took the Beckmanns from Germany to Amsterdam, then to St. Louis in 1947, before they finally settled in New York. Here Beckmann, still haunted by his experiences in the war, angry at the post-war excesses thrown in his face daily in Weimar-era Berlin, and withdrawn into his painting practice perhaps more than ever, took on a professorship at the now-defunct Brooklyn Museum Art School.