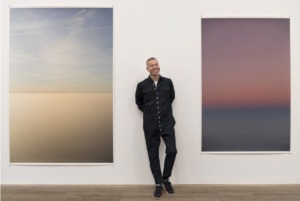 The opening [today] of “2017,” Wolfgang Tillmans’s survey at Tate Modern, is bringing a much needed breath of fresh air to the London museum, and not because recent exhibitions might have been lackluster—on the contrary, the ongoing Robert Rauschenberg retrospective is a triumph, and the recent solos of Agnes Martin and Sonia Delaunay were impeccable, to name a few.

Yet, showing a living and breathing artist who’s making art in response to current events has turned those white walls into a stage that feels unquestionably more relevant.

And if there’s one artist who has been making work about urgent matters, it is definitely Tillmans. His “EU Campaign” posters became the defining pro-Remain, anti-Brexit artwork, ahead of the UK referendum last year. Articulating what many people had in mind but were struggling to find words to express, those posters became emblems, freely distributed and printed, stuck to windows and wielded in demonstrations.