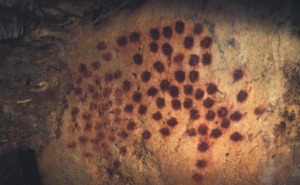 In 1884, Georges Seurat strategically placed dots atop a canvas, leading people to believe they were looking at an image of park-goers lounging along the Seine River in France. The technique was known as pointillism, and it seemed new at the time. But 38,000 years ago, people living inside caves in southwest France were doing something similar, according to findings published last month in Quaternary International.

“Their skills speak of a very high ability to observe in detail what surrounded them and reproduce it with great economy of means,” said Vhils, a Portuguese street artist who is known for his own chiseling of dots and lines into walls, and was not involved in the study.