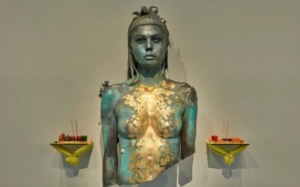 After months of speculation, rumour, and stage-managed hype, Damien Hirst’s latest extravaganza is finally opening in Venice – and, my goodness, it’s enormous.

With 190 works of art, displayed across 54,000 square feet of gallery space, Treasures from the Wreck of the Unbelievable, as the exhibition is called, is arranged across two venues: Palazzo Grassi, on the Grand Canal, and the city’s old customs house, Punta della Dogana. Both are owned by billionaire French businessman François Pinault, a long-time collector of Hirst’s work.

At the heart of the show – which purports to offer a teasing, riddling, Borgesian experience, posing profound questions about truth and illusion, historical fact and myth, scepticism and faith – is an elaborate fable about an exorbitantly wealthy figure from antiquity called Amotan, who supposedly lived during the first and early second centuries AD.

In fairness, there are flashes of wit, moments of technical virtuosity, and an imaginative vision that, on paper, seems alluring. As a populist fairground spectacle, the show is unmissable.  Ultimately, though, Treasures from the Wreck of the Unbelievable offers scale in lieu of ambition, and kitsch masquerading as high art. Perhaps, when the exhibition closes in December, Amotan’s “treasures” should be returned, discreetly, to the bottom of the sea.