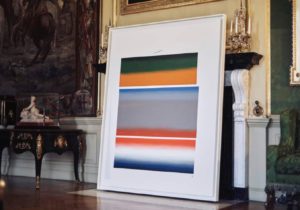 Leonardo DiCaprio knows that if you want to sell a lot of art, you need to bring in the big guns.

Among the guests at the actor’s recent star-studded charity auction in Saint-Tropez was Japanese collector Yusaku Maezawa. Best known for his record-setting $110.5 million purchase of a Basquiat at Sotheby’s in May, Maezawa went home from DiCaprio’s sale with a painting by Jenny Holzertitled Page 6 (2016), artnet News has learned.

A spokesperson for Maezawa says that Holzer is one of the collector’s favorite artists. The work is from her series of silk-screened paintings created from declassified government memos. The price was not disclosed, in keeping with the DiCaprio Foundation’s policy.